If a woman doesn’t have equal rights, is she equally responsible for the crimes of a nation?

The Germans And Their Men is a penetrating study of two particular obsessions: national identity and masculinity. Probing the German male psyche with biting wit and clarity, the film opens with an interrogation of men in the airport – and just why they are wearing ties? 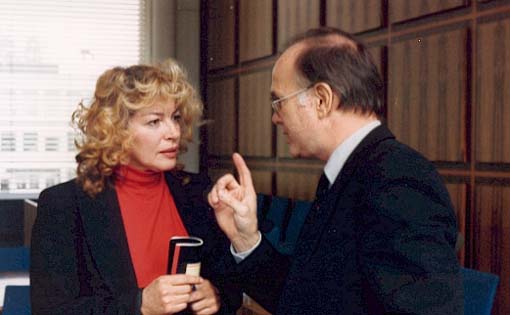 Elisabeth Müller is an Austrian in search of a husband. Vacationing in Bonn, she combs the German capital and interviews the „typical“ German man. Everyone from taxi drivers, schoolboys and theatergoers to civil servants, members of parliament and the Federal Chancellor himself fall under the purview of our woman Müller. Combining journalistic techniques with real and fictional characters, this rich scenario provokes critical questions around gender issues and sexual politics in any discussion concerning the formation of a contemporary national German culture. Originally produced for ZDF (a German TV station), the film offers popular sentiments with startling insights, making provocative connections between feminism, fascism and the legacy of sexism in German history.

„Still the best female helmer on the scene in Germany, Helke Sander takes her time between productions to pour as much personal philosophical reflection into her film as possible.“ – Variety

„A worthwhile film for those wanting a fix on Germany´s ruling male elite. Recommended.“ – Library Journal

This website uses cookies to improve your experience while you navigate through the website. Out of these, the cookies that are categorized as necessary are stored on your browser as they are essential for the working of basic functionalities of the website. We also use third-party cookies that help us analyze and understand how you use this website. These cookies will be stored in your browser only with your consent. You also have the option to opt-out of these cookies. But opting out of some of these cookies may affect your browsing experience.
Notwendige immer aktiv

Any cookies that may not be particularly necessary for the website to function and is used specifically to collect user personal data via analytics, ads, other embedded contents are termed as non-necessary cookies. It is mandatory to procure user consent prior to running these cookies on your website.